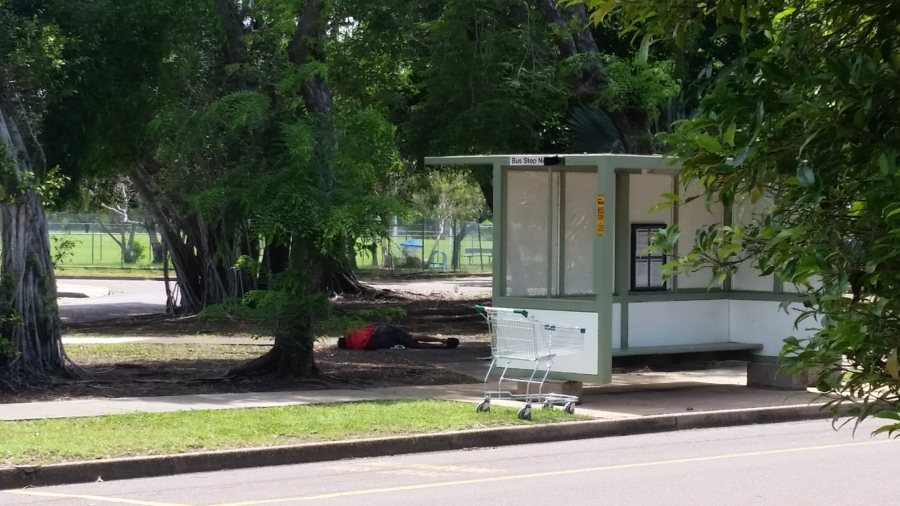 The easy access of my local ‘bottlo’ contributes to the greatest tragedy of all unfolding in my neighbourhood.

Over the past few weeks as the wet season has taken hold in the Top End, an increasing number of homeless Aboriginal people (called long grassers) are on the move.  The bus shelter across the road from our house has become a shelter, a mere stumble from our local handy-store which freely sells alcohol.  This is the site where arguments break out just after 10am daily about who is paying for the grog or the taxi, women yell profanities at their men at the tops of their voices and beer bottles are smashed on the road.  Since the Country Liberal party decided to scrap the ‘Banned Drinking Register’ 3 years ago these scenes have become all too common again.  On the weekend, my husband had to stand at the end of our driveway to motion for cars to slow down, as a man lay on the middle of the road after going biffo with another intoxicated family member.

The greatest tragedy is not that the police showed up half an hour after I called, enough time for someone to lose their life.  Nor is it that there are people passed out on the footpath day after day and how sad it all seems to be living a life like that.  The greatest tragedy is that there is most often a small child in a pusher or clutching on to their mother watching all this.

Don’t get me wrong.  All of it is extremely disturbing and very upsetting to hear and see on a daily basis.  But I can’t help imagining that this child’s future is being laid down right this very minute in front of my very eyes.

Unfortunately I don’t see an end to the drinking and antisocial behaviour in the near future.  Despite the introduction of mandatory treatment of people who break the law while drinking, the trauma, the hurt, the pain remains and the drinking continues.  I despair thinking it is too late for this generation who have most likely grown up in violence or abuse themselves. We can change the future for the children.

But the children.  That is a different matter.  Here we have an opportunity to make a real difference.  To change things for them.  To put a stop to the cycle.

This is where I have great faith in the work of the Healing Our Children project.  The power of the project lies in working with Aboriginal women who are caring for young children to understand the impact that witnessing violence has on the developing brain in pregnancy and infancy.  It is my hope that women will be in a more empowered position to make good choices on behalf of their children.  A conscious and fully-informed decision between staying and putting up with the abuse or leaving to find a safe place, could make all the difference to the life of an accompanying child.

As I sit and stare outside my window to that babe in arms, I feel paralysed knowing there’s nothing I can do at this very moment.  I am also full of determination and hope that we can prevent this tragedy affecting the next generation.

For more information about my work with the Healing Our Children project visit Relationships Australia.