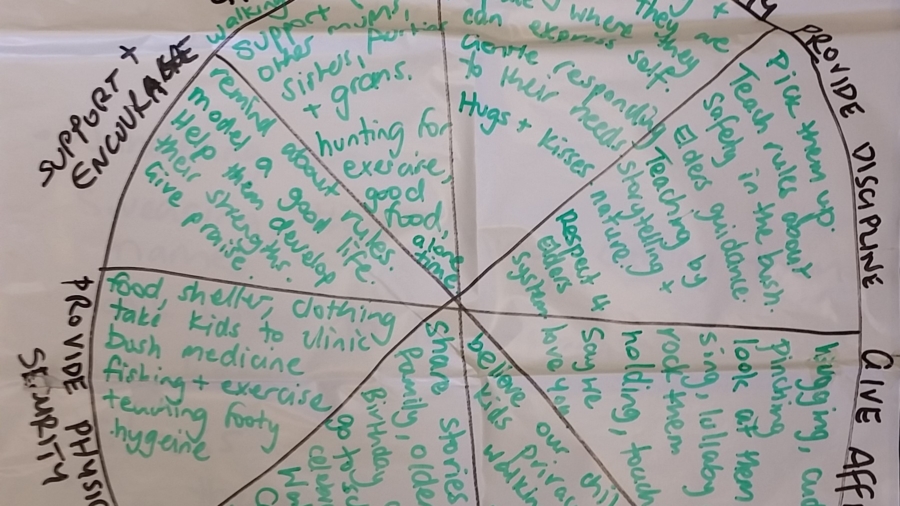 A Learning Workshop on the Tiwi Islands

One of the aims of the Healing Our Children project in which I work involves “building up the capacity of the community to respond to domestic and family violence”.  One of the issues I have with this statement is that it assumes that people don’t already have capacity.  Having worked on the Tiwi Islands for almost 10 years now, I know that there are many people in community actively responding in protective ways and resisting the effects of violence in their families.

So how do we honour what it is that people already know and do, when our aim might be to contribute to the conversation with new knowledge and skills?  My preference is to facilitate ‘Learning Workshops’, however to satisfy the needs of funders and other service providers I find myself using the language of ‘training’ with them.

Perhaps I fell into the concept of ‘two way learning’ because it fit with my values and ethical ways of practising, but there is also a lot written about this from the field of education.  The two way or both way learning approach grew out of the work of Mandawuy Yunupiŋu and Nalwarri Ngurruwutthun in Yolŋu schools in the 1980’s.   Indigenous culture and language was taught alongside the Western curriculum, acknowledging the value and worth of both world views.

One of the strongest beliefs for me is that I have just as much to learn from Indigenous folk as they may learn from me.   By introducing a concept from the Western knowledge system and inviting dialogue about it amongst the workshop participants, so much more can be gained from the experience.  In fact, the results can be quite surprising.

What would this look like exactly?  Well, here’s one example of a simple activity I conducted in a recent learning workshop on the Tiwi Islands.

You may be familiar with the widely used Abuse of Children wheel and the corresponding Nurturing Children wheel developed by Domestic Abuse Intervention Programs (DAIP).   As you would understand, a learning workshop on abuse of children can get quite heavy, so I am always interested in lightening the conversation and focusing on the strengths, skills and abilities of communities.  I decided to cut up the different parts of the Nurturing Children wheel, a bit like slicing up a pie.  Each participant took a piece and talked with a person next to them about how they see this aspect of nurturing children happen in their own community.  Coming back to the bigger group, after clarifying what some of the Western ideas and words meant (some of them were unfamiliar), we came up with a list of ways Tiwi people are nurturing children.

This represented ‘Caring for Children – Tiwi Way’ and it looked something like this. Out of this grew a conversation about the importance of Tiwi culture in growing up strong kids.  There was a strong sense of needing to do something for the children and families who had been affected by violence.

The Elders of the group then started sharing stories about the ceremonies and traditional practices they had used for healing and had been taught about by their ancestors.  These included smoking ceremonies for healing the good spriit and releasing the bad, and the use of white clay for strength and vitality, applied to the body in the bush and left there until it wore off.  They reflected that occasionally the traditional practice of applying white clay to the grieving widow was still happening, but there was a sense that these practices were slowly disappearing.  The women began talking about how they might bring traditional healing practices back, to take the children and families affected by violence out bush and to pass on this knowledge.

From learning to dialogue to action.  This is the power of the ‘two way learning’ approach.

I employ the same approach for everything, whether it be sharing new ideas from the field of neuroscience or introducing people to modalities of narrative therapy.  Oh, and another very important thing.  I develop the content and process of the workshops alongside a cultural adviser, and where possible they are employed and co-facilitating the workshops with me.  This ensures the whole things is culturally-safe!  It means a lot of work has already happened behind the scenes sharing the knowledge with the cultural adviser first!

The process is a piece of pie really!  Take a piece of Western knowledge and serve it up in a digestible way, break it up into bite-size pieces, allow people to chew it over and add their own flavour, and see what is spat out.  You are likely to uncover some precious tried and true recipes of community knowledge, skills and values!

‘About Both Ways Education’ at The Living Knowledge project